She had been wanting to play a concert to help others, and learned of our Notes for Nourishment concerts - so we are very grateful that she contacted us, and that she decided to donate all proceeds collected at her concert to the Unaccompanied Minors program administered by Catholic Charities' Center of Immigration Legal & Social Services. Fundraising for that particular program is also supported by the Interfaith Refugee Welcome, and those two organizations have been working together to help spread the word about Josephine Chan and the exciting one-hour, family-friendly program that she will offer this Sunday together with two of her musical colleagues whom she invited to join her. (Learn more about each of these generous, award-winning young performers below)

Unaccompanied minors are coming into the SF Bay Area in record numbers, with no one to help them stay off the streets until this new program was formed within the Center for Immigration Legal and Social Services. This concert that Josephine felt inspired to organize is a beautiful example of youth helping youth, in a way that only they can - through their unique talents and gifts! There is ample free parking right behind the Basilica, and the location is also walkable from Bart. The Basilica seats 800 - 1000 people so we are hoping that people will come and will bring other friends and family. The concert is also a wonderful opportunity for education and inspiration of other young music students of all ages! If you are curious about their program for Sunday, it will be a combination of solos, duos and a trio (view it below).
--------------------------------------------------------------------------
Josephine Chan, piano
Josephine Chan is a junior at Stanford Online High School and currently studies piano performance with Elizabeth Schumann. She is also a scholarship student at the San Francisco Conservatory of Music, studying chamber music with Joseph Maile and Amy Zanrosso and conducting with Stefano Flavoni. She was featured on NPR’s From the Top and was invited to participate in the 2019 Junior Van Cliburn Competition and Festival. She was also a quarter-finalist in the International e-Piano Junior Competition 2019. She has been a prizewinner of both national and international piano competitions, including the Henry and Carol Zeiter Piano Competition (2020), Golden State Youth Orchestra Concerto Competition (2018), Virginia Waring International Piano Competition (2015), Pacific Music Society Competition, Enkor International Piano Competition (2015) and San Francisco Chopin Foundation Competition (2012).
Josephine’s most recent performances include a concerto recital with the Golden State Youth Orchestra as part of their 2019 Lunar New Year Celebration Concert in Flint Center and a solo recital at the Century Club of California. Josephine also performs regularly in a trio, and her group placed first in the Jane Hohfeld Galante Chamber Music Competition and the American Prize Chamber Performance Competition. Josephine has attended programs such as the Music@Menlo, PianoTexas Young Artists Program, Tanglewood Young Artists Program, Perugia Music Fest, and Southeastern Piano Festival. She has performed in numerous master classes with many artists, including Yoheved Kaplinsky, Emile Naoumoff, Arie Vardi, Bernd Goetzke, Tamás Ungár, Uta Weyand, AnneMarie McDermott, and Garrick Ohlsson.

Pierce Wang is a junior at the Stanford Online High School and a scholarship student in the Pre-college Division of the San Francisco Conservatory of Music (SFCM) where he studies the violin with Ms. Alena Tsoi. Pierce started learning the violin when he was just two years old. He gave his first solo recital, the “All Saints’ Day” program, in the fall of 2014 which showcased many hauntingly beautiful masterpieces. 2014 was a momentous year for Pierce. He was selected to appear on the NPR, From the Top (FTT) live taping show #284 in Rochester (NY) where he performed H.W. Ernst's transcription of the song Der Erlkönig by Franz Schubert, for unaccompanied violin. Through the show, Pierce became friends with many young musicians and the legendary flutists Sir James & Lady Galway. That same year, Pierce debuted as soloist with the Fremont Symphony Orchestra, under Maestro Jason Klein. In the ensuing years, Pierce soloed with several other Bay Area orchestra, the Saratoga Symphony (under Dr./Maestro Jason Klein), Symphony Parnassus (Maestro Stephen Paulson), and Solano Symphony (Maestro Semyon Lohss), performing the Conus Violin Concerto and Saint-Saëns' Violin Concerto No. 3. Pierce also gives performances at select fund-raisers and local nursing homes as his way of giving back to the community. Prior to joining Ms. Tsoi's violin studio, Pierce studied with Prof. Wei He and Mr. Davis Law at the SFCM. He started on violin with Mr. Andy Liu in Saratoga.

Josephine and Pierce invited professional cellist Mr Robert Howard to join them in a Piano Trio performance as the final piece on Sunday's program:

A native of Atlanta, GA, Robert began studying cello at age 12. Graduate of Rice University and San Francisco Conservatory of Music. He has studied and performed at festivals such as Tanglewood, Spoleto, Verbier, the Accademia Chigiana, and the Sandor Vegh Academy in Prague. Robert won first prize in the Rome Festival Competition and has received grants from the Maggini and Virtu Foundations. Robert has performed in the Festival Internacional de Musica in Costa Rica, the Festival de Guadarama in Spain, and on the Mostly Mozart series in Lincoln Center. He has performed with American Bach Soloists, New Century Chamber Orchestra, Philharmonia Baroque, and the San Francisco Symphony. A regular guest on many Bay Area chamber music series, Robert has also made concerto appearances with BARS Orchestra and Stanford Symphony. He has worked directly with composers such as Osvaldo Golijov, Gabriela Frank, George Perle, George Benjamin, and Jonathan Berger. Robert runs his own house concert series, concertsbythesquare.org, which combine thematically linked chamber music programs with food and short lecture presentations. A passionate teacher, he has made two trips to Kenya, where he taught and performed. He has coached at San Francisco Conservatory, Stanford University, San Jose State University, San Francisco State University, and the Conservatorio Superior Coruña in Spain. 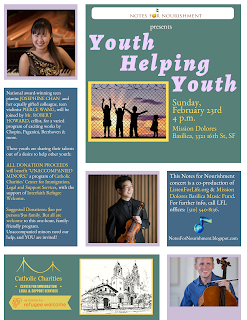 Good music for a Good cause!